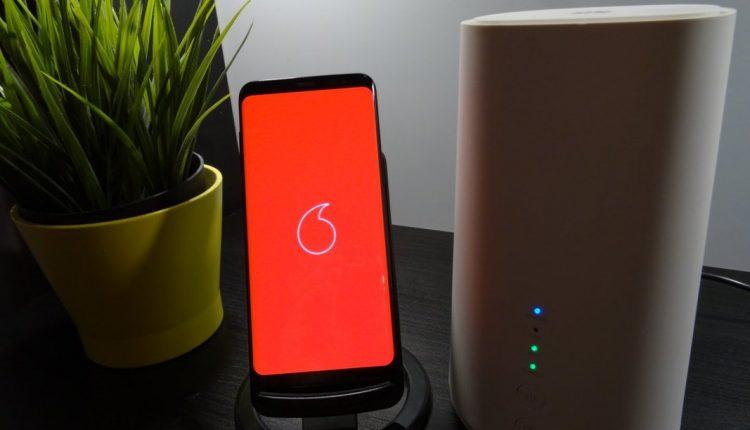 Is Vodafone's 4G Broadband any good?

This is the most important aspect of any broadband plan. If your connection is unreliable, nothing else matters. With Vodafone, you can enjoy the peace of mind that you’re accessing the fastest, most reliable network in Ireland. Vodafone’s 4G network doesn’t just cover the big cities such as Dublin or Cork, it covers rural villages, people who live in one-off farmhouses. Sure, there are black spots, but Vodafone has proved its commitment to providing blanket 4G coverage in a way that its competitors have not. Its crucial that Vodafone covers these rural areas because no one else does. These rural homes suffer from a serious lack of connectivity. No fibre, perhaps no copper broadband either. 4G broadband as an alternative to a fixed connection can provide a substantial uplift in performance. With the National Broadband Plan in uncertainty, 4G broadband is the only viable solution for some.

Thankfully, using Vodafone’s mobile broadband is a pleasant experience. In the vast majority of areas, Vodafone’s 3G and 4G network provide ideal speeds for broadband. Customers can stream what they want, where they want. 4G broadband will never exceed fibre in terms of raw speed and reliability but that doesn’t matter. I was still able to stream Ultra HD content on Netflix, play some online Xbox games and upload my photos to Google Drive. I didn’t have to change my usage pattern because I was using a technically inferior method of connecting to the internet compared to fibre. Everything just worked, and that’s something that everyone wants.

Obviously, things such as ping are a few milliseconds slower on 4G broadband, but for most people, that doesn’t matter. To my surprise, Vodafone’s 4G network outpaces broadband in terms of download and upload speed in many areas. That’s especially true if you connect to Vodafone’s 4G+ network which uses carrier aggregation to achieve theoretical maximum speeds of 400Mbps. Ookla confirms that Vodafone’s 4G speeds are the fastest in Ireland, averaging 24.33Mbps last year, easily beating Eir and 3. Congestion on Vodafone’s network is definitely increasing in some areas but remains well below the levels that competitors are suffering.

If you are someone who is suffering from poor broadband speeds, Vodafone’s 4G network might be a solution. Don’t write off mobile broadband because you perceive it to be inferior to fixed broadband, in many cases mobile broadband is actually faster. Speeds and coverage will continue to improve, as Vodafone expands its 4G+ network and deploys more spectrum to boost capacity. The experience proved to me just how powerful Vodafone’s 4G network is, truly connecting the disconnected, something that I know Vodafone are deeply passionate about. 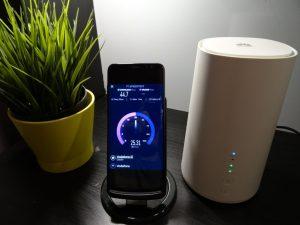 The Plan: You pay for Quality

In terms of Vodafone’s mobile plans, its never been known to be a network that offers huge data allowances. In fact, Vodafone offers significantly less data than its rivals on virtually all of its plans. For many, this is a major pain point. But people are willing to pay for quality, willing to pay for the peace of mind that they’ll have access to a reliable network wherever they go. After all, that’s why Vodafone has managed to keep its customer base at a steady number, even as its competitors offer much more generous plans. Vodafone’s mobile broadband plans are no different. You get less data than you would with Three or Eir and that data costs more. I think its fairer to compare the pricing of Vodafone’s mobile broadband to that of fibre solutions because its 4G network is leaps and bounds ahead of what Three or Eir offers.

Paying €45 monthly gets you 150GB of data to use for broadband and a free Huawei router which I will discuss later in this article. It’s a twenty-four-month contract, which is very long. That’s it, there’s no sneaky price hikes, surplus charges or any other nonsense. You can cancel the contract within the first fourteen days if you’re unhappy with the service and if you exceed the 150GB limit, you won’t be charged extra. Instead, your service will be stopped until the next month.

For many, a 150GB data allowance won’t suffice and I can testify to that. But when I actually think about it, the very people who buy this are most likely coming from cripplingly slow broadband and therefore use very little data. If you don’t stream for hours on end or download large files, I think you’ll get away with the allowance.

Comparing this mobile broadband plan to Vodafone’s own fibre to the cabinet plan, the price is the same after twelve months. You get unlimited data on the fibre plan, so unless you wish to bring your router with you outside the home, you should choose the fibre plan. Three’s own mobile broadband plan gives you ”unlimited data”, unlimited apparently means 750GB these days, for €30 a month. This is significantly cheaper than Vodafone’s plan and offers five times more data. It’s an eighteen-month contract, clearly the better plan. But as I’ve always said, ‘unlimited is only as good as the network as its on and Three’s network isn’t what I would call reliable in 2018. In fact, Three’s network is off limits for most people given its shamefully poor 4G coverage in many areas. For many on the lookout for a mobile broadband plan, Vodafone is the only option. Eir’s 4G network is now arguably slower than Three’s in many areas, as its network is being inundated with a data surge. In terms of coverage though, Eir is closer to Vodafone than Three. Eir charges €30 a month on a six-month contract for 50GB of data. Personally, I think 50GB is a bit of a joke and you will have to fork out another €69 for a router too.

The Router: A blend of Simplicity and Performance 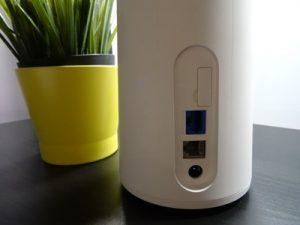 Customers who opt for this plan will receive a router at no extra cost. It’s super easy to set up, just pop in the sim card and play. The hassle of installing a fixed connection is eliminated. No poles need to be erected, no holes need to be dug, there isn’t even the need for an engineer. The sheer effortlessness of using the router is a major selling point in itself. There’s a grin on my face every time I unplug the router, move it out to my garage or better yet, bring it to my friend’s house. All that’s needed is a power supply.

The router itself is supplied by Huawei, now the go-to for networking gear, called the B528. The router can achieve theoretical maximum speeds of up to 300Mbps, so this means it can access Vodafone’s 4G+ network. These Cat 6 speeds are available in more places than you’d imagine. It won’t support the higher speeds that Vodafone will inevitably roll out over the coming months but I don’t think you’ll be disappointed. It supports the latest and greatest wireless standards, 802.11 b/g/n/ac. The router supports 2.4GHz and 5GHz networks which is important, especially if many devices will be connected at the same time.

In terms of the coverage that the router outputs, its very good, it easily covered my medium sized home and I could access the internet in all of the rooms. Obviously, the 5GHz network has a much shorter range than the 2.4GHz network given its higher frequency. It’s simple to configure the router too. The Huawei HiLink app allows you to access your router and see how much data you’ve left. You can use the routers IP address to configure anything from transmit power, VPN, and password. The settings are intuitive, something I think is fundamental with such a product. 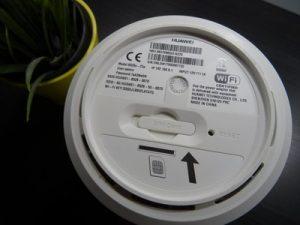 The router is leaps and bounds ahead of similar devices bundled with Three or Eir’s mobile broadband plans. Not only is it more appealing to the eye, it’s easier to use and is more advanced. There is an ethernet port on the back of the router for those that want the very best connection. What’s more, an ethernet cable is bundled in the box.

Conclusion: Vodafone has ticked all the boxes

You get access to the most reliable network in Ireland, an awesome router, there really isn’t many compromises as long as you don’t exceed the 150GB limit. To say that Vodafone’s mobile broadband is faster than fixed connections in many areas is amusing. Three and Eir simply can’t compete, at least at the moment. If you’re looking for a mobile broadband plan, choose this.

I was curious to see which networks have the largest share in the mobile broadband market in Ireland, and the results didn’t surprise me. According to ComReg’s latest report on the Irish market, Vodafone has 45.5% market share in the Irish broadband market, the largest in Ireland. Vodafone’s market share has increased, while Three and Eir’s share has fallen for five consecutive quarters. It’s clear that Vodafone is doing something right.

At the end of the day, people will pay for quality. Vodafone’s mobile broadband offers exactly that. I truly enjoyed using this product, it’s the culmination of years of hard work and billions of euro to create the best network in Ireland.

This device was provided by Vodafone for review.

Why Young Entrepreneurs Are Important