The Phone That Doesn’t Want You to Use It!

Blloc, a German company, has designed a phone for minimalists. The Blloc Zero 18 is designed to allow you to regain control of your phone, focusing on productivity and meaningful tasks while also having a modern and sleek look. The hardware is nothing special, it resembles the latest iPhones and 90% of Android phones in the world with a notch and “bezeless” display (although there is a cool translucent back cover and a headphone jack). However, the phone’s software is what really makes it unique.

No Colours, No Distraction

To achieve a distraction-free user interface, Blloc OS is based on a monochromatic design language. This supposedly relaxes your eyes, distracts you less and helps you to reduce screen time to a minimal level. The absence of colour in the phone’s user interface tries to deter you from using it. However, whether it’s looking at a photo or playing a game sometimes colour is necessary, so Blloc has developed a feature called Colour Touch. By tapping on the fingerprint sensor, the screen will flood with colour and tapping it again will return it to black and white. 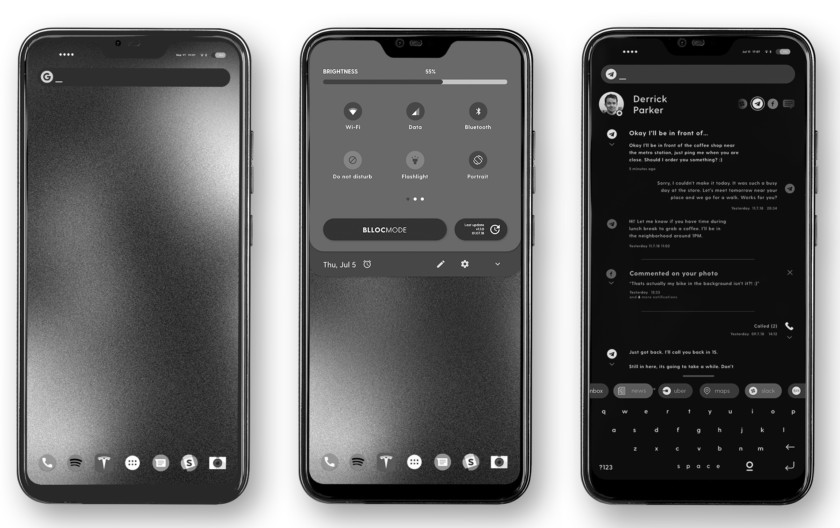 The Blloc Zero 18’s main purpose is to stop you from opening apps. We’ve all been subjected to YouTube’s ruthless recommended feed or Twitter’s never-ending tweets. Have you ever opened Instagram even after just checking it 5 minutes ago thinking there’ll be a ton of new posts? It’s okay, you’re not alone. Blloc aims to tackle this social impulse with Blloc Mode. By switching to Blocc Mode all interactions with your phone are unified in two timelines: The Root – a sort of command center where you can read the news, check the weather or call a taxi without opening an app – The Tree – a unified messaging centre where you can message your contacts from various apps such as Messenger, WhatsApp and Slack, again without opening the apps.

of tiles called Blloc Tiles. Similar to, gone but not forgotten, Windows Phone, the Blloc Tiles allow you to perform various actions by tapping on a tile. For example, you can pause and skip through a Spotify playlist from the Spotify tile. The monochrome tiles can also be darkened so that they don’t distract you.

This phone is not for the most tech-savvy people but rather for minimalists, hipsters and those who feel their phone is too time-consuming. Because of this, the phone isn’t made to compete with the latest and greatest from Samsung, Apple or Google but instead be sufficient enough for most people. It has 4GB of RAM and 64GB of storage. It’s fitted with a 5.8” full HD LED screen (OLED would have complimented the monochromatic UI), a 3000mAh battery and a 13mp rear-camera and 8mp front-camera.

Co-Founder & IT Manager of TY.ie

The 5 Best Headphones for Students